An allegory about identity

Abha Clark takes a deep breath, crosses to the lectern and addresses the audience.

“I belong to a tribe. We all do! Mine is dusting off the word 'tribe,' rejecting the 'primitive' connotation, and redefining it. My tribe is an extensive extended family of multiracial, multiethnic people with African ancestry."

She hits the Google slides app on her pad and an image pops up on the screen behind her.

"Most folks in this tribe identify primarily with their African ancestry but quite a few identify as black and something else.

Mixed people who identify more with their non-black ancestry and social experience would decline membership in this tribe but are relations. Some people who look African American do not strongly feel that way.”

Abha paused, considering whether to cite Tiger Woods as a well-known example of “relations.”

Once she would have readily called Tiger Woods out on this. But now she understood that leaning to the far white is not his fault because powerful forces of assimilation have been part of the making of black America. So she’d dropped the “get with the (black) program” attitude but was not sure she could cite Woods without sounding disparaging.

Watching Abha from the audience, Rain Clark knows what’s going on in her niece’s head. They are more alike than Abha and her mother, Rain’s sister-in-law.

The next slide flashes on the screen. 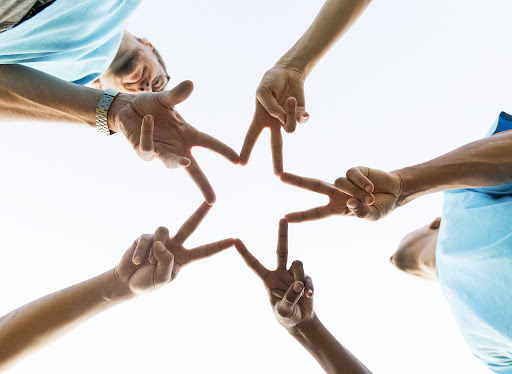 “And, conversely, some people in the tribe who do not look particularly African descended never-the-less feel that way. So in this tribe, membership is not just based on percentage of African DNA. Some people with less than 51% African ancestry identify as black because they were raised with strong social, cultural and family ties to black people.

The terms ‘tribe’ and ‘extensive extended family’ are interchangeable. Tribe’s more folksy — the opposite of what we were signifyin’ when we did the cakewalk.” 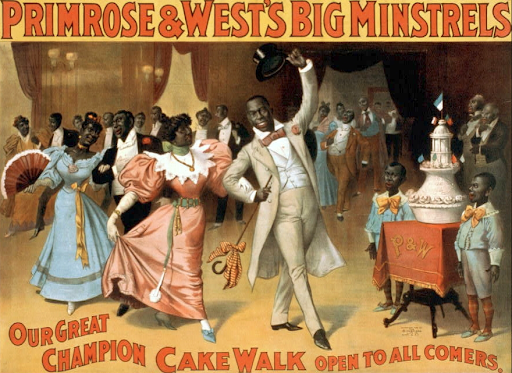 “But in some old film footage of minstrels mimicking white folks, I saw one of the dandies do a turn that looks like a James Brown spin! Go on, godfather of ‘The Godfather of Soul’! The tribe is infinitely black, infinitely morphing and therefore infinitely diverse.

Most folks in our tribe called themselves ‘African American’ but now that designation is shifting to ‘black.’ Some capitalize black, others don’t. Does it make a difference?”

Rain is beaming and bracing herself at the same time. Rain’s brother and sister-in-law gave their first born a conflation of the Ghanian name Aba and the Hindu name Abha. It’s been a long way to this lecture in a hall of masked and unmasked people in June 2021, a way that included Abha’s grandfather buying a book in Harlem in 1944. But that purchase really began in a cremation field in ancient India.

Fires glow against a low sky sun. In the distance a spider-like creature whirls and screams. It’s Kali dancing wildly among pyres of bodies sizzling before being consumed by flames.

Swirling, Kali becomes an idol in the temple of Dakshinewar in 19th century India. Swirling again, she dissolves into a small book. A devotee removes the book from a puja table, slips it into a pouch, leaves his hut and places the pouch in a pack on an ox that’s led away.

The Kali Ma book wends its way through the London Theosophical Society reading room in the 1890s to to the New York Vedanta Society in the 1900s, to a rich man’s library on the Upper East side in the 1920s to trash heap in the street in 1943 where it’s salvaged by a peddler who sells it to Michaux’s bookstore in Harlem.

On a tiny corner shelf, a small book stands alone, Kali the Mother. He opens it. The frontispiece is a hand-tinted lithograph of Kali. Her snake-like red tongue dangles to her neck as she holds a bloody severed head and brandishes a scimitar with two of her four hands. 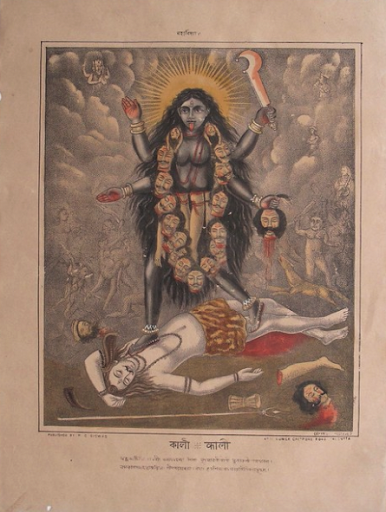 Les knew, but not why, he was meant to have this old book.

Later that evening, Les sits at a piano at Minton’s Playhouse plunking keys in a quirky way, feeling his way into a new style.

Like this, he thinks, off the beat, off the main time but dead on in a whole ‘nother way.

A few months later, sitting on the side of the bed, Les shows the Kali Ma book to his wife Rosetta.

“Name my baby after a monster?!,” Ro shrieks in horror.

“Kali’s not a monster. She’s dancing in the graveyard to show it’s a garden where death — ego death — is the seed of awakening. Her name means ‘the black one,’ the universal black field that births the stars that birth us and our baby.” Les rubs Ro’s swollen belly. She pushes his hand away.

“You’ve been smoking tea with those musicians.”

“No, really, this can be a healing thing. This dark child comes in with a message.”

“I don’t see that message! I just see a crazy picture!”

“It looks horrible but it’s a parable. Kali Ma was created by wise men a long time ago to teach the masses who did not know how to read. They wanted to shock the hell out of people! Know that you are god! Part of god! The bloody heads are the selves who were hypnotized by physical appearances and become separate from god. But god is not some man in the sky. It’s everything. And the separation is what we call evil.”

Les holds the book closer to Ro’s face so she can see the small details in the image.

“Mother Kali slashed her childrens’ arms and wears them as a skirt to show we’re always reaching out for what we think is outside of us. Her necklace of bloody skulls means we’ve become attached to the outside show. So she chopped them off to warn us, ‘don’t get stuck in the outside show, the prison of appearances!’ … and to remind us that we are that in which everything appears.”

“Nobody’s gonna understand that message unless their head’s messed up like yours. If it’s a girl, let's name her after my grandma Rain. I’ve always loved that name.”

“You would’ve loved Grandma Rain. Her Daddy staked out some land after the war. Virgin land on a tip of Arkansas. Soil was so black that when the first drops of rain hit, it sent up a smell that made folks crazy. But not reefer crazy! That rain hitting dry rich soil make them delirious! The fragrance was so strong! That land grew okra the size of squash and watermelons so big kids hid behind ‘em. So they named grandma, Rain. She was a wild spirit, a sweet wild spirit. Had a gap in her front teeth and wore her hat brim tilting left.”

“That’s a nice story baby but hear me out.”

Les slides in bed, tilts the lamp shade and a golden flame spreads across the first page of the book. “Here’s a bedtime story.”

He reads, soon lapsing into paraphrasing the story about the battle between good and evil. About how the regular people and the more evolved people called “good” (or gods for short) were being massacred by demons.

“The folks and gods raised their strongest forces — not the army — but the forces of nature called shakti, like what we call Mother Earth. But shakti’s universal energy. A female force called mother Kali.

So the folks summoned shakti in the form of Kali Ma. And boy did she come. Whirling about, slaying the demons every which way. But the demons kept on a-comin’.”

Les licks the tip of his finger and turns another page.

“Kali’s gotta grow ever more hellacious, baaaaaad as hell, to vanquish the demons. And she does, until only one is left, their supreme leader, the devil.

The devil sashays up to Kali, all cocky like he’s got it covered. But mama clobbers him good. As the devil lay dying, billions of lil demons rise from the gushing blood.

The mother of all battles is back on! Kali wages god almighty knock-down, drag-out holy damnation! She’s gotta become deranged to wreak all of the havoc needed to vanquish evil. She greedily laps up the devil’s blood! That’s what the snake tongue shows. How could she not get drunk? How could she not go insane from drinking all that devil poison. How could she not go beyond insane from the horror of all this? But it doesn’t kill her. She howls and wails and dances wildly with a nice expression on her face which makes her look even crazier … because she is … and is not.

The people watching the battle from a safe distance become alarmed. Kali’s now comin’ to get them too! Her blind rampage bears down on good folks and sinners alike. “Please!,” they implore Lord Shiva, Kali’s husband. “Save us!”

Shiva bravely entreats Kali but she swats him away like a gnat and goes on rampaging. Desperate and willing to die to save the people, Shiva decides to stop Kali by throwing himself under her feet.

Dimly from her terrible stupor, Kali recognizes Shiva and drops her heads and swords. The people are saved.

“And that’s the end of that battle.” Les closes the book. “But there will be more.”

A few months later as Ro is sleeping soundly, Les eases out of bed, picks up the bassinet, carries it to the living room, lights a candle and places the Kali Ma book next to it. Holding the baby over the book and candle, Les whispers, “Kali Ma, please watch over this child and guide her back to the oneness that will be veiled by thinking she’s only Rain. I name her your goddaughter, Kali Rain.”

Seventy-six years later in the auditorium, having learned about her secret namesake and trying to live up to its fierce righteousness, Rain cringes as Abha makes her next point.

“White people are quite happy to capitalize black to right the wrong of black people's oppression. It seems like the anti-racist thing to do. They’re pleased to defer as lowercase white. They don’t feel inadequate whereas they perceive my tribe as being deficient in needing this boost. They’re feeling buff and more than enuff as they capitalize black in deference to black people … and as they keep white low, laid back and lookin’ cool.”

A murmur rumbles through the audience of slightly more white than black people.

“But that’s understandable,” Abha says soothingly. “And of course when I say, ‘they,’ I’m generalizing.”

”But what’s not understandable is when they recognize the problematic aspects of capitalizing color-based IDs and don’t want to acknowledge it or don’t know how to.”

“I understand white folks’ reluctance to discuss this problem — it’s sensitive and dicey — but the reluctance is also problematic.”

Abha moves on to another point and Rain exhales but feels complicit. Abha has incorporated the seeds of Rain’s younger self, the self that did not fully understand the meaning of her Kali Rain name. Those seeds have mushroomed and now Abha’s heading deep into a discussion about black identity without identifying with who she, herself, really is. 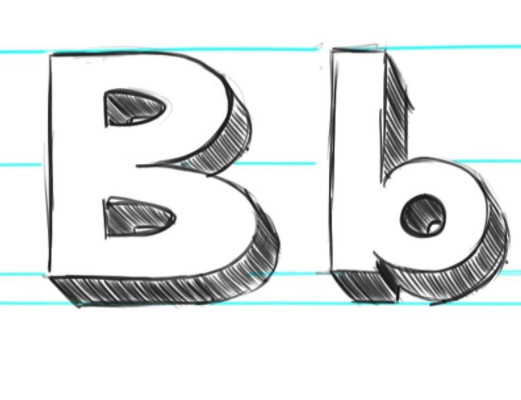 What's in a name?
0 Comments
Full freedom
for black people is being both black and universal
Guiding principle
flexibility
Location
USA
Contact
planetary.kinships@gmail.com
Copyright 2021 © Who Are We